Leela BOOMS Stockfish and TCEC Superfinal. She is leading with 2 points! 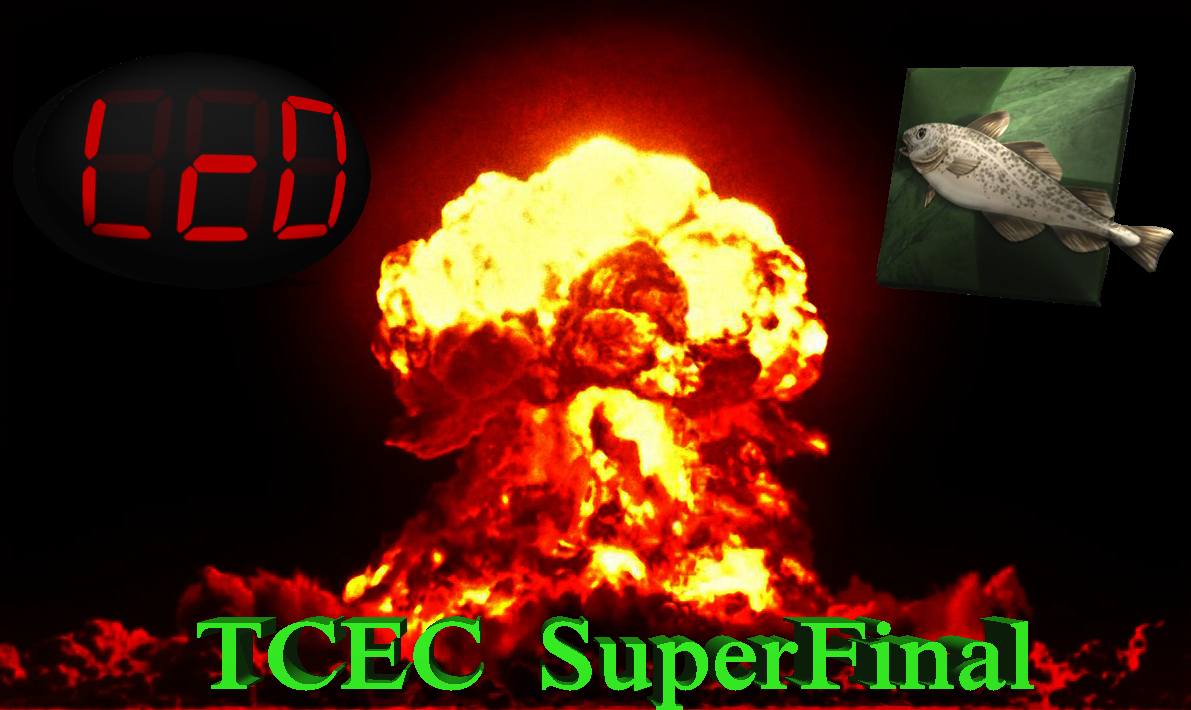 As per the usual expression of BOOM of TCEC chat when an engine finds something good, Leela right now is making a great surprise in her first appearance in a TCEC superfinal by leading after 64 games with 2 points more. A 33-31 score in favor of Leela.

After a 14.5-14.5 score with 6 wins by each engine after 29 games, 19 consecutive draws happened. But then Leela won one game and she was on the lead for the first time on the superfinal! But there was more drama for Stockfish fans as after 3 more draws Leela won again and hold the reverse(with same opening) so she was 2 points up after 54 games!
Things started to get hot and she could have even be 3 points up had she found in the next game 55, with Leela having white, the 85.Kg3 move that wins. She was short on time though and the win would be tough and long so it was not such an obvious win.

Leela till now has 1 easy thrown win in the King’s Gambit Accepted game-8 with black where she blundered heavily by playing a horrible 51…Be3?? blunder throwing the win, another one very probable win would be in game 35 if she played 29.Bg2! instead of the 29.Ke1? even though that was not that obvious win, she also has 2 thrown games, one at game 21 where in a slightly better for Leela position she played the horrible super blunder 34.Kf1?? losing on the spot and at game 20 in an equal, after the correct 39…Qb3 position, she played the also super bad blunder 39…Rd6?? giving the full point to Stockfish immediately. Super blunders that even programs of 1995 like Fritz 5.32 and Crafty of the time would avoid!
Leela also blundered at game 22 where at move 32 in a position where Stockfish had an advantage, she played 31…Qd6? that loses on the spot, while the correct 31…Qb6 might hold with good defense.

Yet after all these Leela’s very bad mistakes that are uncharacteristic for this level, she manages to be in front by 2 points.
This shows that this new approach of Chess engines has huge potential. It also shows the previously(before Deepmind appeared) thought “perfect” or unbeatable engine Stockfish is not in fact perfect or unbeatable and has big room for improvements.

So game 58 was reached with the score at 29.5-27.5 in favor of Leela and it was the turn of Stockfish to make a win. Its first after game 22!
Game 22 till game 58 had Leela with 5 wins, 0 losses and 30 draws!
But this was again a win of Stockfish where Leela did her part helping Stockfish by making a mistake again but this time in a difficult situation. In a King’s Indian defence, Stockfish pressed hard Leela’s Kingside organizing an attack. Leela defended well and she would have big chances to hold had she found 33…Kf8!, yet Leela must have been lost in complications and played Qf3? losing easily after that as Stockfish used his own version(after Houdini doing this to Stockfish in TCEC CUP2 winning against Stockfish) of Alekhine’s gun to crush Leela’s position.

After 4 more draws Leela managed to grab another win in a sharp French variation(MacCutcheon) having white and defended easily in the reverse so she now leads with 33.0-31.0
Leela on French defense seems to be on another level of its own against other engines.

This is one of the most exciting superfinals of last years as the big favorite to easily win, Stockfish, has big troubles to be on the lead and in fact Leela is ahead by 2 points after 64 games.
Stockfish was never in that position since its reign of being the most dominant engine began, from about 2015 and after. In all superfinals of the last 3 seasons, Stockfish won them comfortably(+18 points Season11, +13 points Season 12 and +10 points last Season 13) but here Leela shows a better understanding of the positions especially in openings, outplaying Stockfish so result so far is not that suprrising for one that sees the games. Yet, Stockfish is incredibly good defender and the top of its kind in tactics so it still has a good chance of turning the tables.
36 games remain so we will soon see if Leela manages to keep this small advantage….

Last game won by Leela in the French was an amazing one showing how much potential this new Neural-Net approach has. After Leela played some clever openings moves advancing the h Pawn to h5 for gaining space there, she sacrificed 2 Pawns to gain some more tempo and space for attacking to white’s King.
Stockfish thought Leela’s Pawns sacrifices weren’t sound and that its position is fine, but Leela played the unexpected to Stockfish 20.Bg6! while Stockfish expected Leela to just regain the 2 Pawns with Bxc4. Leela knew better playing Bg6 with a +2.25 score. Stockfish unimpressed captured the Bishop giving just a calm +0.42 score but after next move Leela’s eval started to climb even more! Leela must have seen that the h8 black Rook is out of the game after all these. Stockfish couldn’t see it as it can’t search in patterns like Leela does, and has to calculate concrete variations but seeing that a Rook is out of the game needs an excessive amount of computation so Stockfish is really blind in this situation here.

And after Queen’s exchange Leela gave another 2 Pawns, playing with 3 Pawns less but thinking she is winning with a +4.35 score. Stockfish realized Leela was right around at that time but it was too late.
Leela used the very weak black squares and her strong Pawn march in Kingside excellently as also of course the fact that she paralyzed h8 Rook of Stockfish with her Bg6! Leela took advantage that she was effectively was playing with a Rook more so she won easily.
That h8 poor Rook of Stockfish, hasn’t moved the whole game!

Above we mentioned Leela thinking about +2.25 after playing Bg6 while Stockfish being on +0.42 only. But evaluation of Leela does not correspond to evaluation of Stockfish.
If we use the evaluation to win percentage and expected score of THIS article (that also TCEC uses) for Stockfish’s evaluation, as also the Leela’s own evaluation to win percentage and expected score mapping (ecpected score=ArcTan[centiPawns/2.90680623072]/3.096181612 + 0.5), for translating her evaluations to probabilities of winning, we obtain the following 2 diagrams to compare.
We see that a +3.0 eval by Leela has much less probability to win than for Stockfish’s +3 eval. 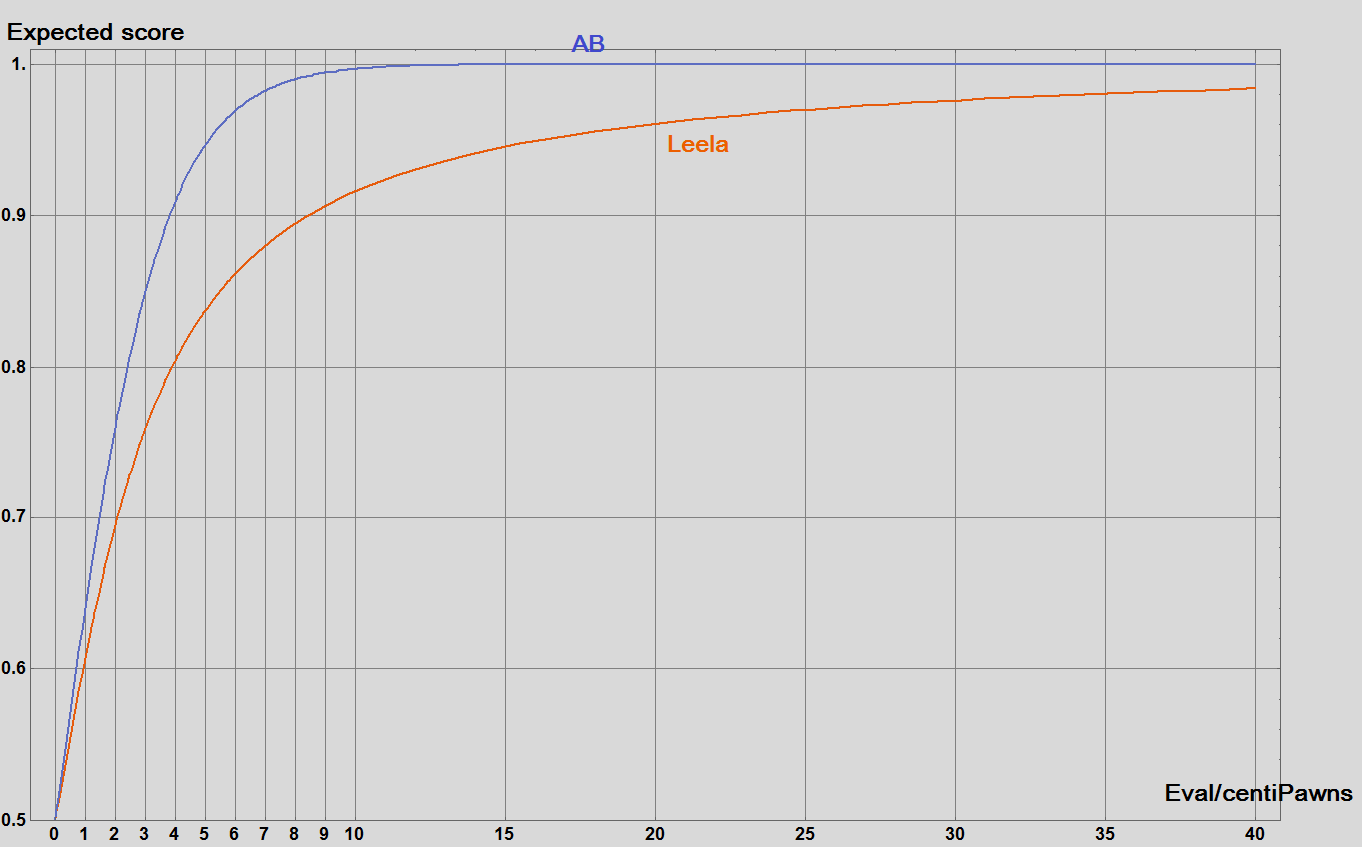 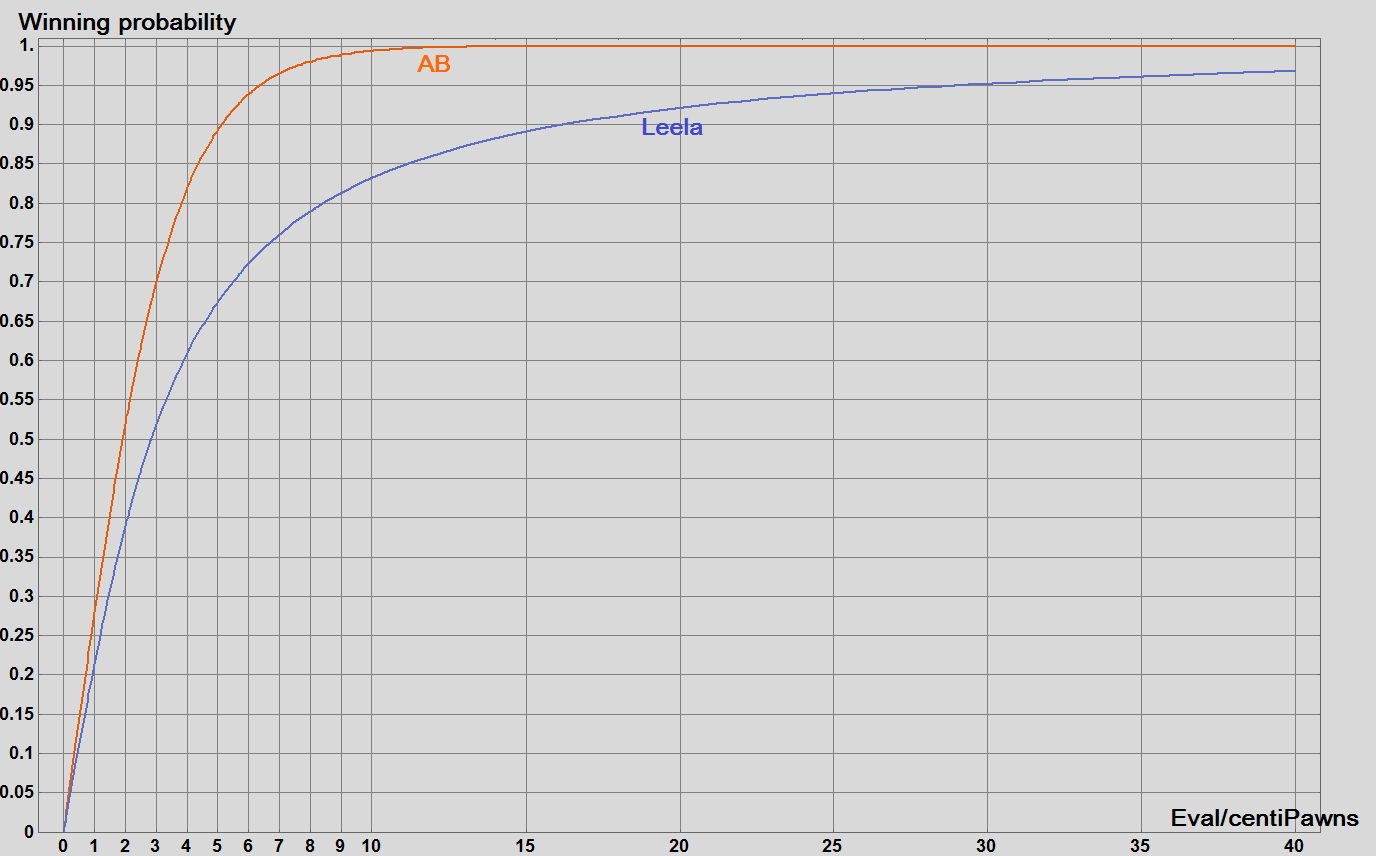 Next 2 games 65 and 66 were not without much drama.
After Leela leading with 2 points after 64 games, she completely outplayed Stockfish with her having having and she reached a totally winning position with 7 pieces on the board :

But Leela did not manage to find the winning path so instead of easy winning she just drew! Another inexcusable half point lost that would have made the point difference between her and Stockfish to be at +3. But it stayed at +2.
So along with the other 2 easy points she has thrown she would be at +7 from Stockfish if she didn’t have these incredible blind spots. So the potential of her seems even higher when these things get fixed.

But things would be even worse for Leela in the next game.
In the reverse game Leela didn’t have any problems to equalize and a drawish position was reached with Stockfish saying +0.18 and Leela +0.04 and the 176 threads Stockfish that was kibitzing the game said also 0.00.
But then an unfortunate thing happened. Leela does not run on main hardware of 44 cores of TCEC but on remote one that has the 2 GPUs. And unfortunately the internet connection of this remote hardware was cut off so connection with Leela was lost and Leela refused to make a move.
Meanwhile Stockfish on 176 threads had analyzed 4 trillion(!!) positions keeping its eval to 0.00.

So according to the very bad in this aspect TCEC rules, the game would have to be replayed from the starting position and not from the last position of the interrupted game!
This is obviously a bad rule for handling crashes(that it’s not the engine’s fault for them) as it introduces possible bias towards an engine and the final result of superfinal does not depend only on the 2 engines that are playing but also on external factor, like because cutechess crashed or because an internet provider had problems. And this is horrible!
For example if the position before the crash has one engine winning, or to have a big advantage or to have a small advantage then starting again from start position the replay game is unfair to that engine as it has to gain again this advantage and nothing guarantees that(engines are not deterministic) and if this does not happen and replay is draw then this engine has not won because of e.g an internet provider would be faulty or because of a power outage etc. Or if there is a drawn position and replay happens then one engine may win the game, so this is unfair to the other engine again.

And the latter is what exactly happened here too. A replay happened (from starting position) and there was a crash again and then game was replayed again, from starting Chess position again, but in that 3rd game Leela did not manage to hold. In a complicated position where Stockfish had an advantage she blundered again missing some nice and deep tactics and Stockfish evaluation from +1.57 to +6.37 and went on to win easily from then.

So Leela had to not draw this game(playing the initial one) because an internet provider had problems!
This is not a football game where a pigeon can enter the field and can affect a goal for example. This is a 100% controllable Chess tournament and a proper replay from the position before the crash can happen.
A reason that was provided in the past by some TCEC admins was a replay from the previous stopped position can’t happen, as engines would not have all the hash nodes saved from previous search so they have to start search from scratch, but this is a 100% bogus reasoning as:

So after these misfortunes instead of Leela being +3 points after 66 games, she is only just +1 point ahead of Stockfish.

The incredible game Leela didn’t manage to win from a 7 men tablebase position: