As many of you have noticed, Leela’s thinking time allocation seems suboptimal for during the CCCC games. It almost doesn’t spend any time in the opening, and spends a lot in the endgame.

It’s not completely clear whether time management is really as bad as it looks though. In this post I’ll explain the time allocation algorithm, its parameters and explain effects that we see.

There are 7 parameters which affect time allocation:

I agree that 7 parameters is too much, but there are attempts to add some more!

So, as a basis, algorithms tries to divide all remaining time roughly using the following time distribution (x axis is move number): 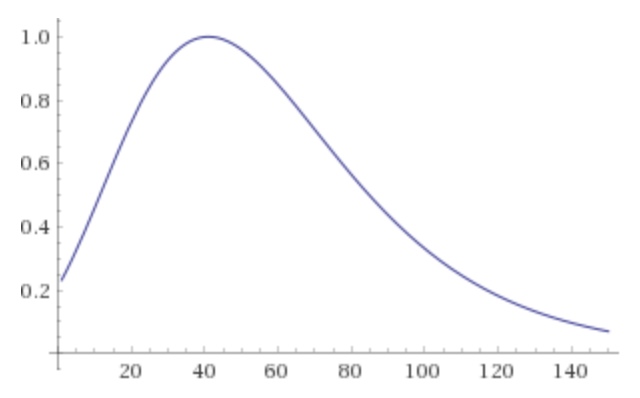 To control the shape of that curve, the following parameters are used:

When algorithms has to compute “base time” for the current move, it takes all1) remaining time (including all1) time from future increments), divides it proportionally to time curve values for all1) remaeining moves, and what the current move gets is the time used as a base.

all1) means either “time/moves till control”, for games where it exists, e.g. games where time is added every 40 moves, or 50 moves from the current move if time is not added.

With all other features off that’s how time allocation would look like. But we have other features. The most important of those is “futile search aversion”, which used to be called “smart pruning”.

The Monte-Carlo Tree Search algorithm that Leela uses works as a sequence of so called “visits” to move variants. When time is over, the move with highest number of visits used to play.
It may happen, that when the time is nearly over, some of moves have so few visits, so they are guaranteed not to overtake the currently leading move. In this case it’s better not to allow any visits to such moves and spend more on ones which still can theoretically lead to another decision.

Remaining number of visits is estimated from remaining time and current nps. When nps is not stable, this estimation may be wrong. Because of that even “theoretically impossible” moves may sometimes happen.

When all moves (except one which leading now) are considered unpromising, the search stops earlier, without using all the budgeted time.

Current value for –futile-search-aversion is 1.33

As I wrote above, due to futile search aversion, search doesn’t use all of the budgeted time.

More precisely, it can take up to (1 + value-of-futile-search-aversion-flag) times less time.

To compensate for that, there is a –slowmover flag, which just multiplies the budgeted time for a move by a constant. Currently –slowmover is 2.4.

Ponder is Leela’s ability to think during opponent’s time. Unlike most of other engines, which think about one opponent’s move, Leela thinks about all of them. Leela thinks more about more likely moves though. During ponder futile search aversion is not active (as there is no way to predict how much more is left to think).

Because of ponder, it often happens that right after the opponent’s move, the position is already well thought, and Leela sees that within the budgeted time there is no way to change move. Because of that, she may think much less than (budgeted-time / (1 + value-of-futile-search-aversion-flag)), and in fact it often moves immediately.

It is true that all default parameters were never tweaked with ponder on, and it’s likely that they are not optimal.
It’s also suspected, that as nps is slower in the first moments of the search, Leela underestimates the amount of work that it can do within budgeted time, and futile-search-aversion triggers too early.

That’s just a fixed time which is subtracted from a budgeted time, to compensate for different technical (e.g. network) delays. Currently it’s 100ms by default.

But it turns out, that other engines treat this value differently. In v0.17, Leela thinks that it will lose that time for each of “all 1)” remaing moves, but apparently it’s more correctly to make this value mean " total lost time for the rest of the game “. This will be changed in v0.18.